The History of Villiers

Villiers Charitable Institutions was founded in 1821 under the will of Hannah Villiers.

The History of Villiers

Villiers Charitable Institutions was founded in 1821 under the will of Hannah Villiers.  While archives on Hannah and Edward Villiers are limited, it is known that Hannah Villiers, née Scott, was born in 1733 to a gentry family.  She married Mr. Edward Villiers, a gentleman of similar social standing circa. 1758, and together they contributed much to the people of Limerick. They became major financial contributors to the poor of the city and county, regardless of denomination. Edward served as an MP for the Borough of Kilmallock, in addition to holding the Mayoralty of Limerick from 1762-67, followed by the role of County Sheriff.

It is however, the philanthropy of both Edward and his wife Hannah in relation to the County Hospital that first brings Hannah to the forefront as a charitable benefactor. The County Hospital was established in 1759, and in 1765 the Irish Parliament passed The County Hospitals’ Act, to build county infirmaries throughout Ireland. The Act was applied to the new Limerick Hospital and, in 1766, the Limerick County Infirmary was opened with 40 beds. The infirmary was funded by a county grant, initially of £100, and by local philanthropy, including from Hannah and Edward Villiers, who also served on the Board of Governors.

Following Hannah’s death in 1821, the reading of her will announced that her primary wish for her estate was the building of an alms-house for ’twelve poor Protestant Widows’, with two adjoining schools; one for boys and one for girls, as well as various annual payments to local charities. The trustees and executors of the will were responsible for ensuring that all could be maintained by the administering of her estate.  Six years after her death, in 1827, the first Villiers schools were opened, officially known as ‘Mrs. Villiers’ National Schools,’ but often referred to locally as either ‘The Nicholas Street Schools’ or ‘St. Munchin’s National Schools’.

Mrs. M. Johnson was Teacher and Headmistress and Mr. R. Armstrong Teacher and Headmaster of the girls’ and boys’ schools, respectively.  Hannah’s instructions were to instruct both male and females ‘in the Protestant religion, and to teach them to read English well.’  She also made a clear distinction when requesting that boys be taught ‘the rules of Voster’s Arithmetic…[and]…to instruct the girls to knit and spin.’

In 1850, the trustees brought the schools under the guidance of The National Board of Education. This may have been due to increased demand for school places (student numbers had risen from 20 to circa 50 per school), which placed great strain on school resources. Membership of the Board increased funding, which was needed for additional teachers in a growing school. At this stage, the schools moved to Henry Street, Limerick, where they would remain until the middle of the 20th century.

The schools continued to provide education on both a fee-paying and gratuitous basis until 1925, when an assessment of their expenditure demonstrated that they were struggling to balance the budget, and simultaneously fulfil the wishes of Hannah. An advisory committee was established and, in August 1925, Villiers School became co-educational.  The result of this amalgamation was the continued expansion and growth of the school, with the role of Principal being held consistently by a Headmaster.

The school relocated from Henry Street to its current location on the Tivoli campus on the North Circular Road, less than one mile from Limerick city centre, in 1953.   In spite of the change in location, Villiers has never forgotten its tradition, ethos and heritage which meant that it was, as a former clerical member of the board once described it, “more than an academic institution.”

Villiers grew in the 1960s and 1970s from just 90 students to 220.  This rate of growth continued as successive headmasters grew not only the school’s intake but also developed the school’s footprint. The campus has been expanded and modernised, with the addition of classrooms, dormitories, a dining hall, sports facilities and state of the art laboratories.

In 2011, following the retirement of former Headmaster Mr. Thomas Hardy, the appointment of Ms. Jill Storey as Headmistress has meant that the role is held by a female for the first time in almost 100 years.

Two years later, in 2013, the school acquired the two-acre adjacent site, which was home to Derravoher House, associated grounds and  lodge house. The flagship building in Derravoher, officially open as part of Villiers since September 2016, now houses a new library and is the school’s international hub, designed and renovated  with the International Baccalaureate Diploma Programme (IBDP) in mind.  Villiers was authorised as an IBDP school in 2017, the first and only boarding school in Ireland to do so, as the outcome of a five-year process. This is seen by those involved as a very natural progression for what has traditionally been one of Limerick’s most “International” schools.

The school’s evolution, as one would expect over 200 years, has involved both subtle and significant changes as it developed on its course, establishing itself as a co-educational secondary school, located in the leafy suburbs of the North Circular Road.

In 2021, Villiers School sits on a sixteen acre campus and is a modern and innovative school, home to almost 600 students from approximately thirty different countries, against the backdrop of the timeless tradition of both Tivoli House and Derravoher House. 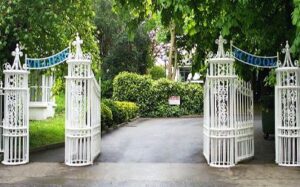 For Admissions Enquiries, please fill out an Expression of Interest.

For General enquiries, please call or email us, or complete the contact form below.